I’ve decided that 2020 is going to be my year of frosting. As much as I love using my American buttercream on my cakes and cupcakes (AND cookies), I am ready to play around with other types of frosting. I’m kicking off this year with this Russian buttercream recipe.

While doing a bit of research, I learned about sweetened condensed milk frosting. There are a lot of different versions out there.

Some simply add in a bit to an American or swiss meringue buttercream base, but other recipes take it further.

That’s when I stumbled upon Russian buttercream. When I first read about it, I was pretty shocked. It is pretty much JUST butter and sweetened condensed milk.

Sweetened condensed milk seems so sweet and thick. The thought of adding it to buttercream didn’t seem very appetizing, let alone being the flavor of a frosting.

Much to my surprise, Russian buttercream frosting isn’t overly sweet or heavy. It’s surprisingly smooth, with a fluffy texture.

I know it sounds crazy, but you’ll understand once you try it. Trust me on this one!

What Is Russian Buttercream?

Russian buttercream is a frosting that’s used on a lot of Russian and Eastern European cakes. It’s an insanely simple recipe that really is just butter and sweetened condensed milk.

I like to add in a touch of vanilla extract and salt for kicks, but that part is optional.

The process of making it is even easier than my American buttercream recipe, which I didn’t think was possible.

You simply whip the butter up until it’s light and fluffy, then slowly incorporate the sweetened condensed milk.

And voila! I love that there’s no powdered sugar involved, because it makes the process a lot less messy.

Do I Really Have to Whip the Butter for That Long?

The key to creating that delicately fluffy texture is to beat the heck out of the butter.

I’m talking at least 5 minutes at a medium-high speed with a whisk attachment or hand mixer. This incorporates a ton of air into the butter.

The butter should actually change color by the end of the whipping process.

It should be very white in color before you try to add in the sweetened condensed milk.

All the air that’s incorporated into the frosting gives it that silky smooth texture, and a very light mouth feel.

This also helps the frosting taste a lot less sweet and rich. If you’re used to American buttercream, get ready for an entirely different texture and taste.

It’s kind of like a hybrid between Italian meringue buttercream and American buttercream.

While it is insanely easy to make a batch of this Russian buttercream recipe, that doesn’t mean that things can’t go wrong.

The main issue that I ran into while recipe testing was having my frosting separate.

Too Warm of Butter

This can happen for a few different reasons.

If your butter is too soft/warm, it won’t whip up as well and will have trouble incorporating all the sweetened condensed milk.

Too Cold of Butter

On the other hand, if your butter or kitchen is too cold, it might also throw off the texture of your frosting.

The key is that the butter and the sweetened condensed milk are at the same temperature.

Adding in the Sweetened Condensed Milk Too Quickly

Your frosting might also separate if you try to mix in the sweetened condensed milk too quickly.

It’s super important that you gradually mix it in.

I like to pour it in over 4 additions, to allow the butter lots of time to incorporate all that sweet goodness.

Your best bet at having your frosting seamlessly come together is using butter that is actually at room temperature.

This doesn’t mean that it’s super soft to the touch.

It should be somewhat firm when hold it, but you can make an indent in the side of the stick with your finger.

I find that taking my sticks of butter out of the fridge about an hour before I need them gives me the right consistency.

How to Fix Separated Russian Buttercream

If your frosting does separate, it’s ok. We can easily fix it!

My kitchen is usually pretty warm, so a lot of time my frosting separates because my butter gets too soft.

If my buttercream is broken after I add the sweetened condensed milk, I pop my mixing bowl into the fridge for 10-15 minutes to cool it down.

Then I whip it up again, and it usually comes together right away. If that doesn’t do the trick, continue to repeat this process until it thickens up and comes together.

On the other hand, if you think your butter might have been too cold or your kitchen is cold, I suggest taking a different approach.

Scoop out about a half cup of frosting and place it in a separate bowl. Heat it up in the microwave for 5 second, then give it a good stir with a rubber spatula.

Repeat until the little bowl of buttercream is smooth again. Be sure to heat in small increments, so that the frosting doesn’t get too thin!

Add this back into your bowl of frosting, and try whipping it again. Repeat this process until your frosting comes together and is smooth.

You can also add in powdered sugar (1/2 cup at a time) to thicken your frosting, and bring it together.

Making this Buttercream in Advance

While I am all about making buttercream in advance, this frosting can be a bit more finicky.

It can be made in advance, but you will need to re-whip it with your stand or hand mixer once it comes to room temperature.

Be sure you don’t let it sit out for too long before adding it to a cupcake or cake, or else it can get too warm and lose its silky smooth texture when you try to stir it.

I let my frosting sit out overnight, and found it had developed air bubbles overnight. When I went to restir it to make it smooth again, it separated :/

But don’t panic, mine only separated because my kitchen was too warm, and I aggressively stirred it!

To keep things simple, I suggest just making it the day of.

It comes together so quickly, and you’ll spend pretty much the same amount of time trying to re-whip it the day of.

Adding This Frosting to Cakes or Cupcakes in Advance

While adding this buttercream to a cake or cupcake the day it’s made is best, once the frosting is on the cake or cupcake, it will stay silky smooth!

This frosting only separates when it’s too warm AND you try to re-stir it.

If you add it to a cupcake or cake ahead of time and chill it in the fridge, it will keep its shape and consistency.

It will also be fine once it’s set out and brought to room temperature.

I made this layer cake with Russian buttercream, and let it sit in the fridge for 2 days before pouring a mirror glaze over it. The frosting tasted great, and didn’t change in texture at all.

This frosting is amazing on cupcakes, cakes, cookies, and even with fruit!

If you try this Russian buttercream recipe, I’d love to hear what think of it!

Please leave a rating, and let me know your thoughts by sharing a comment.

This recipe makes about 3 cups of frosting, which is enough to frost about 2 dozen cupcakes or a 6-inch layer cake.

Use room temperature butter! I suggest taking out your sticks of butter from the fridge about 1 hour before you plan to make the frosting.

Slowly add in the sweetened condensed milk to prevent the frosting from breaking.

If your frosting seems too soft, pop it into the fridge for 10-15 minutes to thicken it.

If you want to color this buttercream, use gel food coloring to get a vibrant shade without throwing off the consistency of your frosting.

Thank you so much for the recipe! I am wondering though is it stiff enough to not shift while delivering say for half a hour/1hr? If so what would you recommend to best help it to stabilize? Freezing the cake...?

Will this icing hold up when making roses, or other decorations? Whenever any one shows icing they only show spirals.

Don’t know where to start baked a two tier chocolate cake and used the recipe above. Some where in the process there was a breakdown which required me to incorporate the confection sugar the taste was hidden in the final product. After the cake was frosted with the buttercream and I began to slice the appearance alone was beautiful. This visual delightful treat was actually baked too be shared with my co-worker’s whom all enjoyed and presented me the same question. What kind of buttercream is this and what’s that taste. Many fingered the vanilla extract but I believe it was the combination of the extract and condensed milk. Very delicious! I was curious as to if chocolate cocoa could be added?

Can you add extract or food gel coloring to the Russian buttercream?

How long can you store any leftover frosting the fridge for? 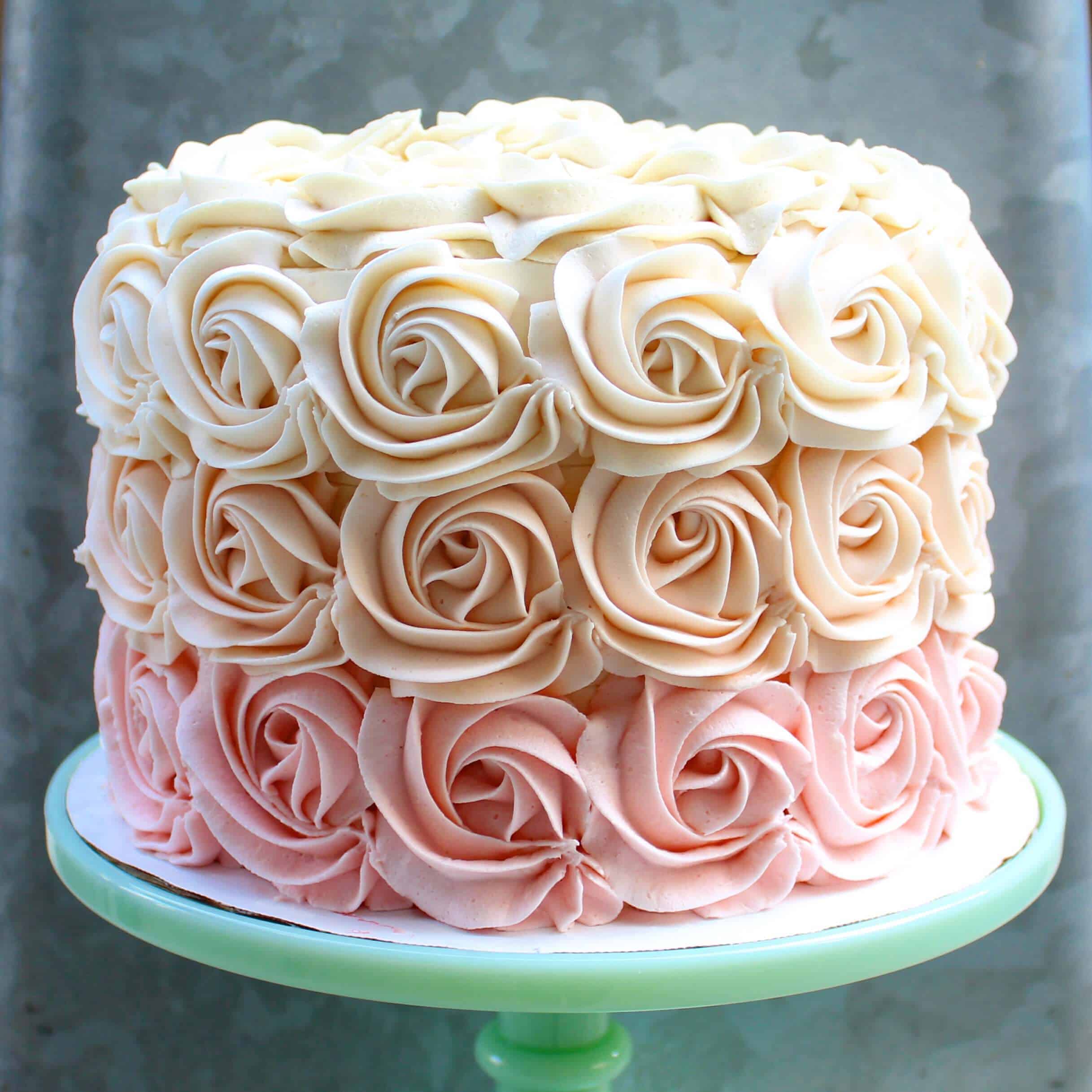