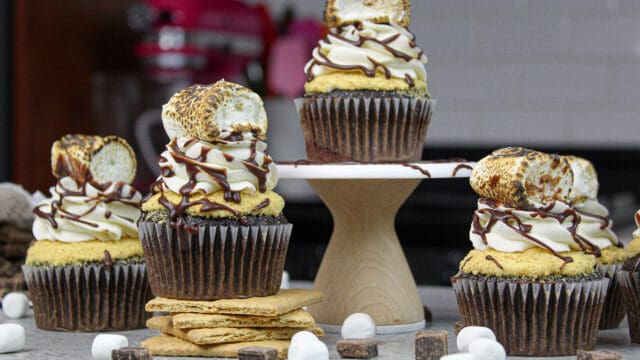 Even though it’s not quite s’mores season right now, there’s no reason we can’t enjoy this s’mores cupcake recipe!

The gloomy winter weather always gets me a little down, and the thought of toasted marshmallows and chocolate perks me right up.

These cupcakes are made with moist chocolate cupcakes, and the centers are filled with marshmallow cream and chocolate ganache.

I used my moist chocolate cupcake recipe as the base for this cupcake. However, I did make a couple changes to it!

For this s’mores cupcake recipe, I decided to include less instant espresso to let the marshmallow flavor shine through. If you’re not a fan of coffee, you can omit it from the batter.

I also chose to use regular baking cocoa rather than black cocoa like the original recipe calls for. While I think black cocoa is great, it’s not really that classic chocolate flavor that you image when you think of a s’more.

It sounds a little crazy, but this cupcake recipe uses chocolate chips. You add them into a bowl with hot water and cocoa powder, which melts the chocolate into a smooth chocolaty mixture.

I would’ve just filled the cupcakes with marshmallow fluff, but it’s a little too stiff to pipe. To thin it out, I mixed in some heavy cream.

This makes it much easier to add the filling into each cupcake. It also makes the texture of the filling a bit creamier, which is an added bonus!

The finishing touch on this s’mores cupcake recipe is a toasted marshmallow.

I initially thought about adding the toasted marshmallow into the center the cupcake, but I worried it would firm back and up once the cupcake was decorated.

Instead, I decided to add it to the top of the cupcake, almost like a massive, gooey garnish! I liked this idea better, because it enables you to add the marshmallow right before serving the cupcakes!

This guarantees the marshmallow will be warm and gooey as your friends and family bite in!! And to me, that’s the most important and defining characteristic of a s’more 🙂

I toasted my marshmallows with a wooden skewer and a kitchen torch, but you can also broil yours in the oven.

If you try this s’mores cupcake recipe, I’d love to hear what think of it!

Please leave a rating and let me know your thoughts in the comments section.

If you want to add a chocolate drizzle like I did, I recommend using my chocolate ganache recipe! I heated it up to allow me to drizzle it over the cupcakes.

If you want to make mini chocolate cupcakes, this recipe can be baked in mini muffin tins! It makes about 40 mini cupcakes, and they only need to bake for 9-10 minutes.

These cupcake can be made in advance! If stored unfrosted in an airtight container, they can last for:

If you have extra buttercream you don't use, it can be stored in the fridge for up to 2 weeks.