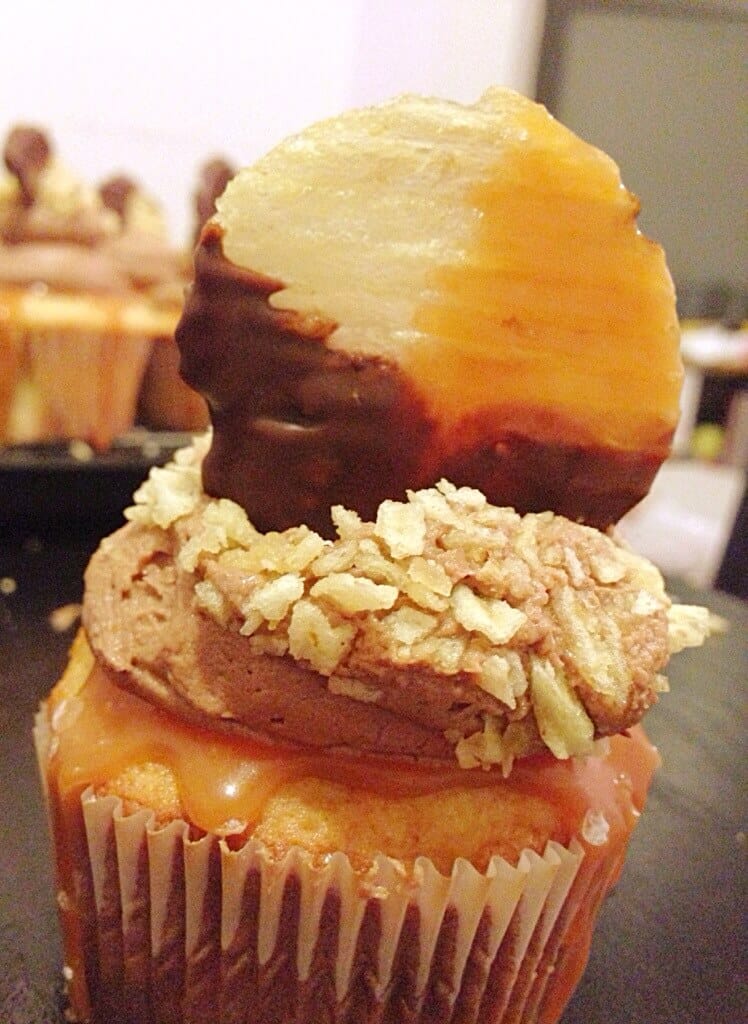 As much as I love sweets, I am a HUGE fan of salty/sweet combinations. I believe that this cupcake is the very epitome of a salty and sweet treat.This cupcake has a salted caramel cupcake base, which is topped with a whipped chocolate buttercream, and crushed potato chips. The cherry on top is a chocolate dipped, caramel striped, potato chip. A bit extreme? Maybe. But what’s life, if you can’t combine chocolate, caramel, and potato chips??

Inspiration: Craft, Bake, Sew, Create
Yield: 32 cupcakes
Calories per cupcake: 315
Cupcakes:
1 cup (2 sticks) butter, softened
2 cup granulated sugar
4 large eggs, at room temperature
2 tsp. vanilla
3 1/4 cups all-purpose flour
3 tsp. baking powder
1 tsp. salt
1 cup milk
1/3 cup salted caramel sauce (I used the recipe shown here)
Milk Chocolate Frosting:
1 1/2 cups (3 sticks) butter, softened to room temperature
5 cups powdered sugar
1/2 cup cocoa powder
1 1/2 cup milk chocolate chips
1/4 cup cream
Crushed Potato Chips:
Approximately 3 cups of whole potato chips, very finely crushed
Chocolate Covered Potato Chips:
1 cup milk chocolate chips
1 Tbsp. vegetable shortening
potato chips
Preheat the oven to 350 degrees. Line a cupcake pans with paper liners. In a large bowl, beat the butter with an electric mixer on medium speed, then add the sugar, and beat until light and fluffy (about 3 minutes). Add the eggs one at a time, beating after each addition. Add the vanilla and beat until combined.
In a separate bowl combine the flour, baking powder, and salt. Alternate adding this flour mixture and the cup of milk into the butter mixture, in several installments.
Fill cupcake layers three-quarters full. Bake for about 15-17 minutes, as just cupcakes begin to brown (or until a toothpick inserted in the center comes out clean). Cool completely before frosting.
While the cupcakes cool, whip the butter in a mixing bowl at a medium speed. Sift in the powdered sugar and cocoa powder. Mix together, until loose crumbs form. Melt the chocolate chips and milk together on the stove until smooth, and let cool (5 minutes). Add this mixture to the butter crumbs, and mix until the color of the frosting has lightened. The air you whip into the frosting will make it a lighter shade of brown.
Lightly rim the cupcake with some of the remaining caramel sauce. Sprinkle lightly with sea salt. Pipe a large mound of frosting in the center of the cupcakes using a large round frosting tip, and then dip the tops (just the frosting) into the crushed potato chips. I found that placing the crumbs in a bowl makes this a a lot easier
For the chocolate covered potato chips,  melt the milk chocolate chips and shortening in a pan at a low heat. Stir, until the chocolate is smooth. Dip half of a potato chip into the left over caramel sauce, then dip the other side in chocolate, and set on a cookie sheet lined with wax paper. Refrigerate for about 10 minutes, until the chocolate has set. Gently press the chip into the top of the cupcake for a garnish. 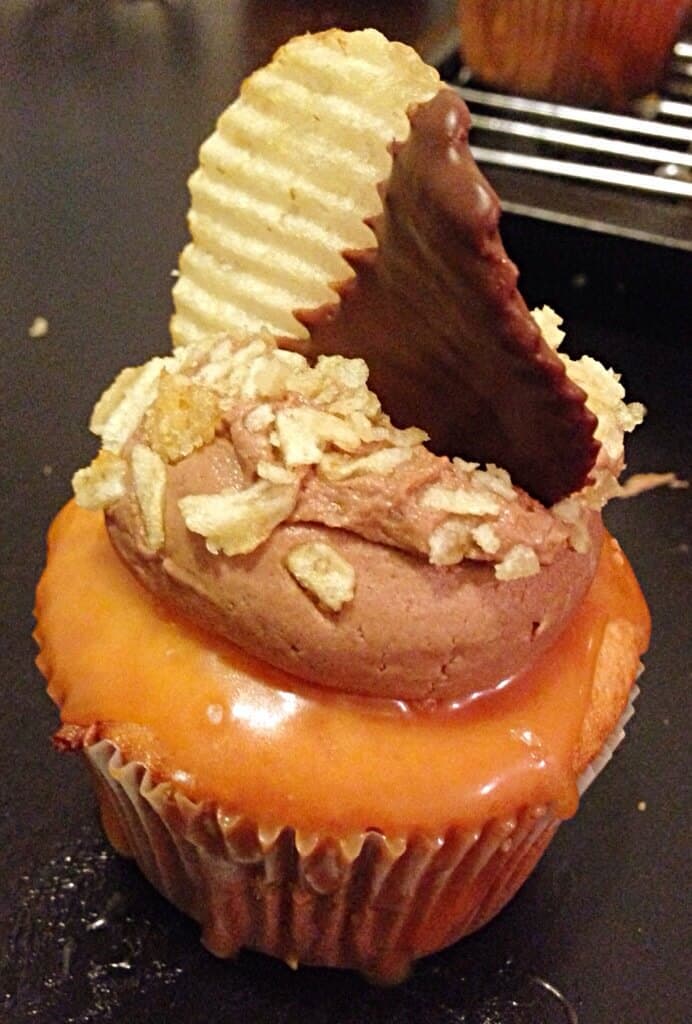 I experimented a lot with this recipe, and found that the caramel is a great addition. It adds another dimension to the cupcake, both in appearance, and taste. I don’t think that the caramel in the cupcake batter made a huge difference, but I do think that rimming the cupcakes and salting the caramel was worth it. I also tried the cupcakes with and without the potato chip crumbs. I highly recommend topping the frosting with the  potato chip “sprinkles.” The sprinkles add a wonderful texture, and really intensify the salty/sweet experience. I made 28 large cupcakes, and about 12 mini cupcakes. I clearly was channeling my inner “baked by Melissa.” I also tried doing a tuxedo dip with the caramel sauce and chocolate. 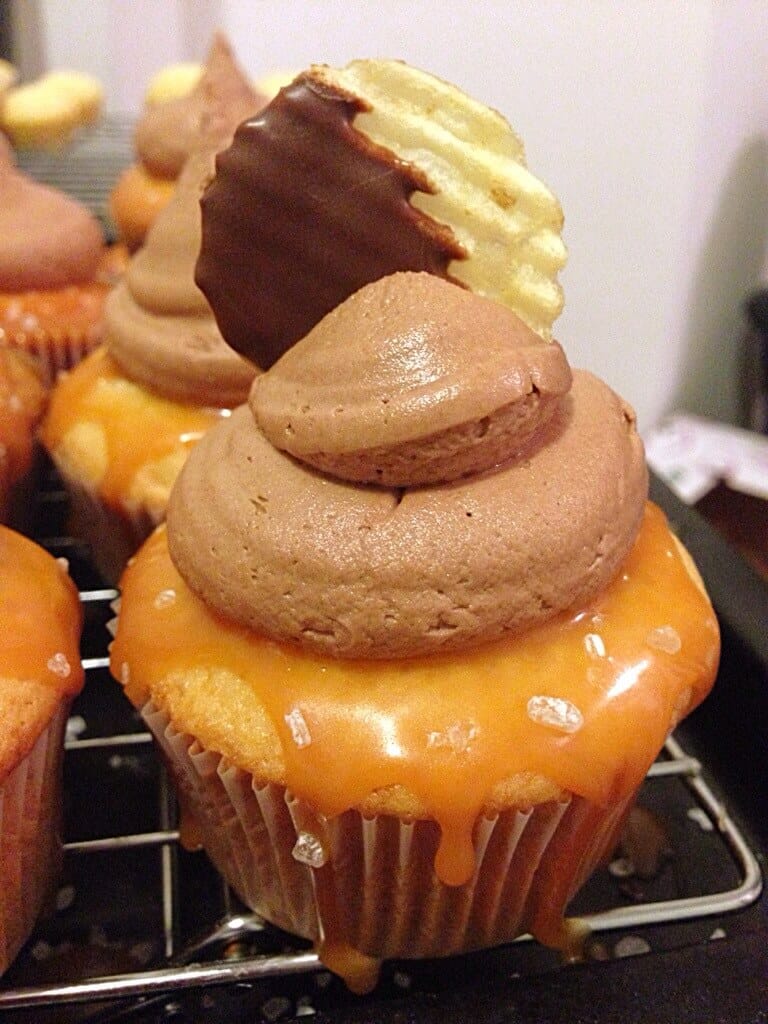 The caramel sauce is a bit too soft for dipping…but it did look cool 😀 I recommend just dipping the chips in chocolate though, unless you choose to thicken your caramel sauce. 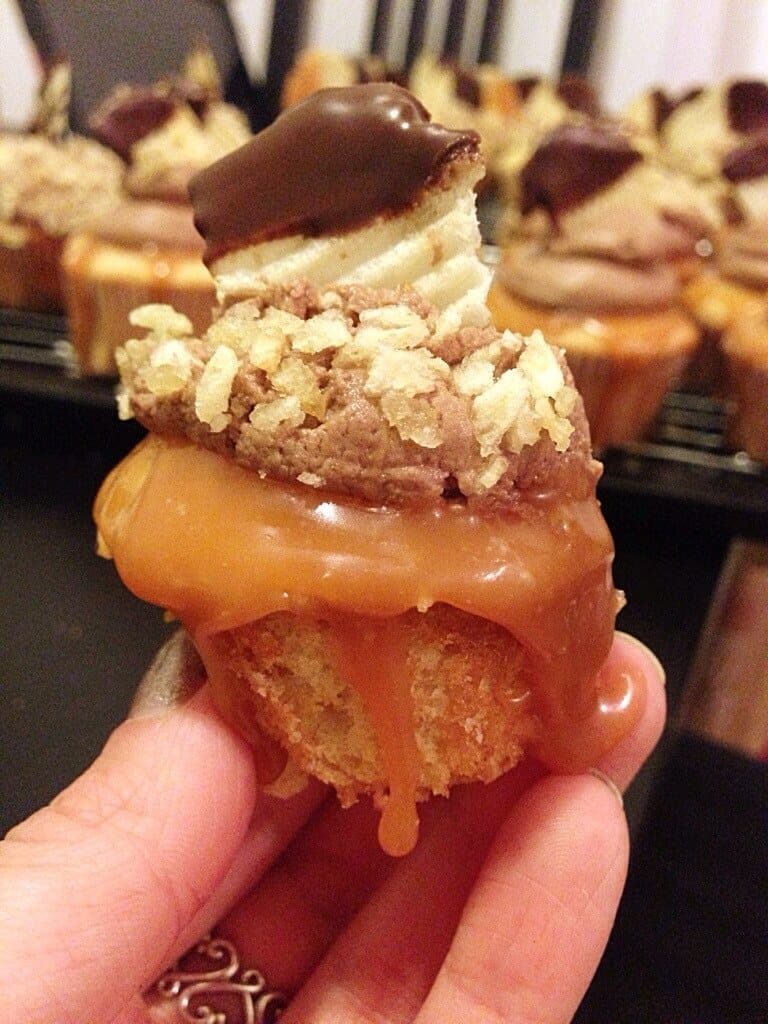