Banana pudding is such a perfect summer dessert. It doesn’t require any time in oven, it takes minimal prep time, and it isn’t too heavy! Especially this version. I lighted it up by swapping out the heavy cream for lite Cool Whip, and mixed the almond milk with the pudding. I also increased the ratio of bananas to pudding and wafers. These little changes make a big difference, and leave you feeling great!

Combine the chilled almond milk with the pudding, and whisk until fully combined. Let the pudding chill in the fridge for 30 minutes.

While the pudding chills, prepare the salted caramel sauce. Pour the sugar into a large, heavy-bottomed pot, and whisk until completely melted. The sugar will clump in the beginning, but don’t worry…it will melt completely with time. Allow the sugar to cook until it turns a beautiful amber color, and has a nutty aroma. I don’t have a candy thermometer, so I go completely by visual cues. At this point, remove the mixture from the heat. Whisk in the butter, then the cream. The mixture will bubble up, so be careful during this stage (I burned my finger!). The last step is to stir in the salt. Let the caramel cool to room temperature.You can store leftover caramel in a mason jar (I had about 3/4 cup left over). It will last in your fridge for about two weeks.

One the caramel is cool and the pudding has set, layer the pudding. I like to use mason jars, but a giant trifle container or stemless wineglass would work great too. Begin with a layer of pudding, followed by crushed wafers, banana slices, caramel sauce, and cool whip. Repeat until the jars are full, or you run out of ingredients 😀 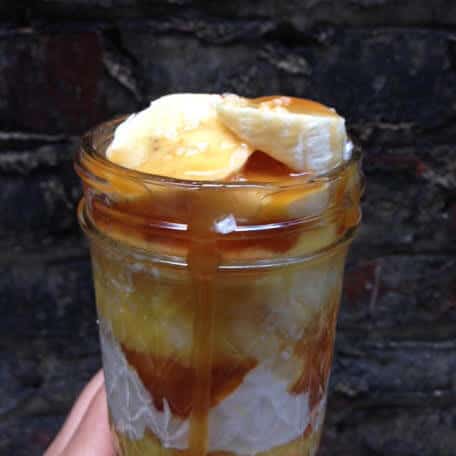