SPRING IS HERE! And so is my friend Uli’s birthday!! AND my other coworker Brandon’s Birthday!!! Clearly, this can only lead to one thing – A lemon blueberry swirl birthday cake! I followed this recipe for the cake portion, but altered my own favorite buttercream frosting recipe to make a lemon buttercream. I used the following ingredients:

The first step was to preheat my oven to 350 degrees. I then greased and floured my eight inch cake pans and line bottom with wax paper (I only have two pans, and this cake calls for three layers…so I reserved a third of the batter in a bowl until I was done baking the first two layers). Next I creamed together  the butter, sugar, lemon zest and lemon extract until the mixture was fluffy.  I added the egg whites in gradually, a couple at a time.

In a separate bowl I mixed together the flour, baking powder and salt. Then I alternated adding in the flour mixture and milk into the butter mixture. I beat the mixture on a medium speed during this, and continued mixing it until there weren’t any lumps. I then reserved about 1 cup of batter in a small bowl (to be mixed in later), and divided the remaining batter evenly into three containers (my two cake pans and a bowl).

The next step adds to the aesthetics AND taste of the cake 🙂 I added 2.5 Tbsp of blueberry jam to the cup of reserved batter and mixed it well. Then I drizzled this over my two cake pans, and created a swirl design by dragging a knife up and down through the drops of cake/jam mixture. This allows the jam mixture to get slightly incorporated into the batter, but just into the upper layers. It looks beautiful when you cut into the cake, and the top of each layer has a hint of blue.

I then baked each layer for about 25 minutes or until the toothpick came out clean and the cake had just started to pull away from the sides. I let the layers cool in the pan until I could hande them (10-15 minutes), and then remove from pan onto a wire rack. I was then able to pour the rest of the batter into a cake pan, and repeat the jam swirl. As I let the layers cool completely, I made the frosting! 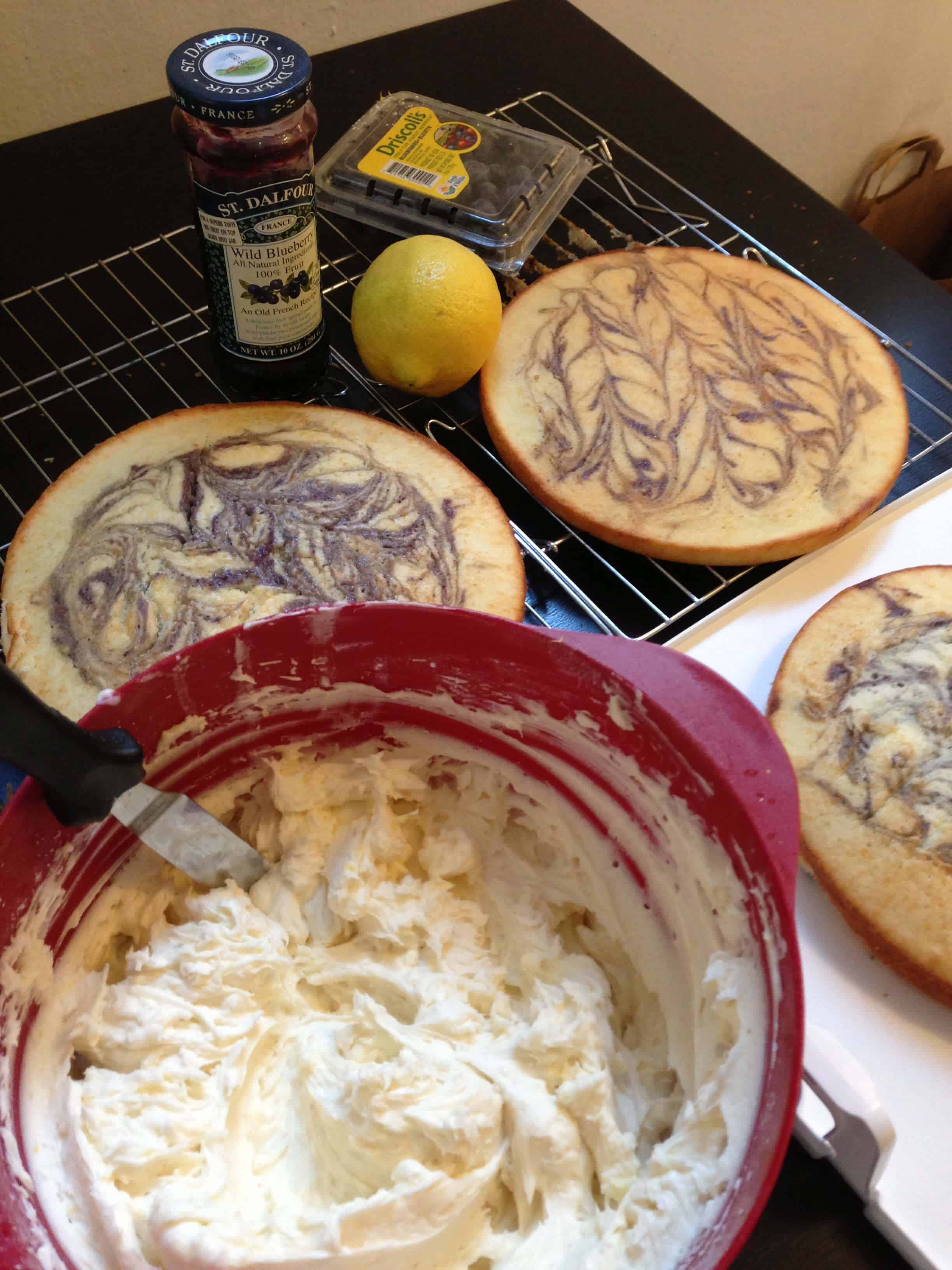 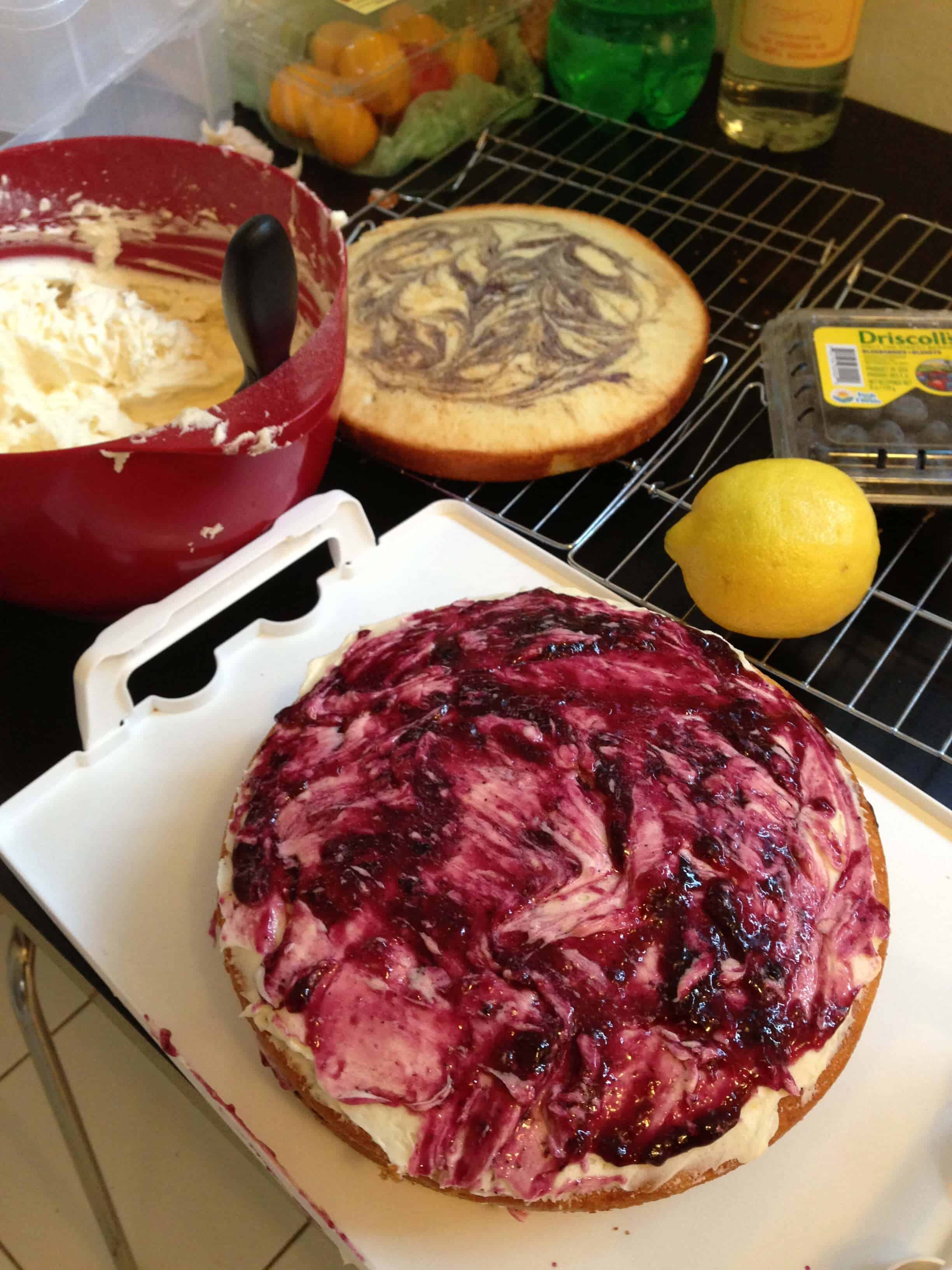 This recipe originally called for a relatively complicated frosting involving a candy thermometer….and I’m sorry, but that is just too much work for a frosting! I like to keep my frosting simple, and full of flavor. Soooo I decided to make a lemon buttercream. I used the following ingredients:

Make sure you alternate bottom down, top down with your layers as you go, to make sure your cake remains relatively level. Once I filled the layers and had evenly frosted the top and sides of the cake, I made a ring around the base of the cake with blueberries, and made a jam swirl on the top of the cake with the remaining jam (using the same technique as described above). The finishing touch was placing a few blue berries and couple lemon wedges on top. 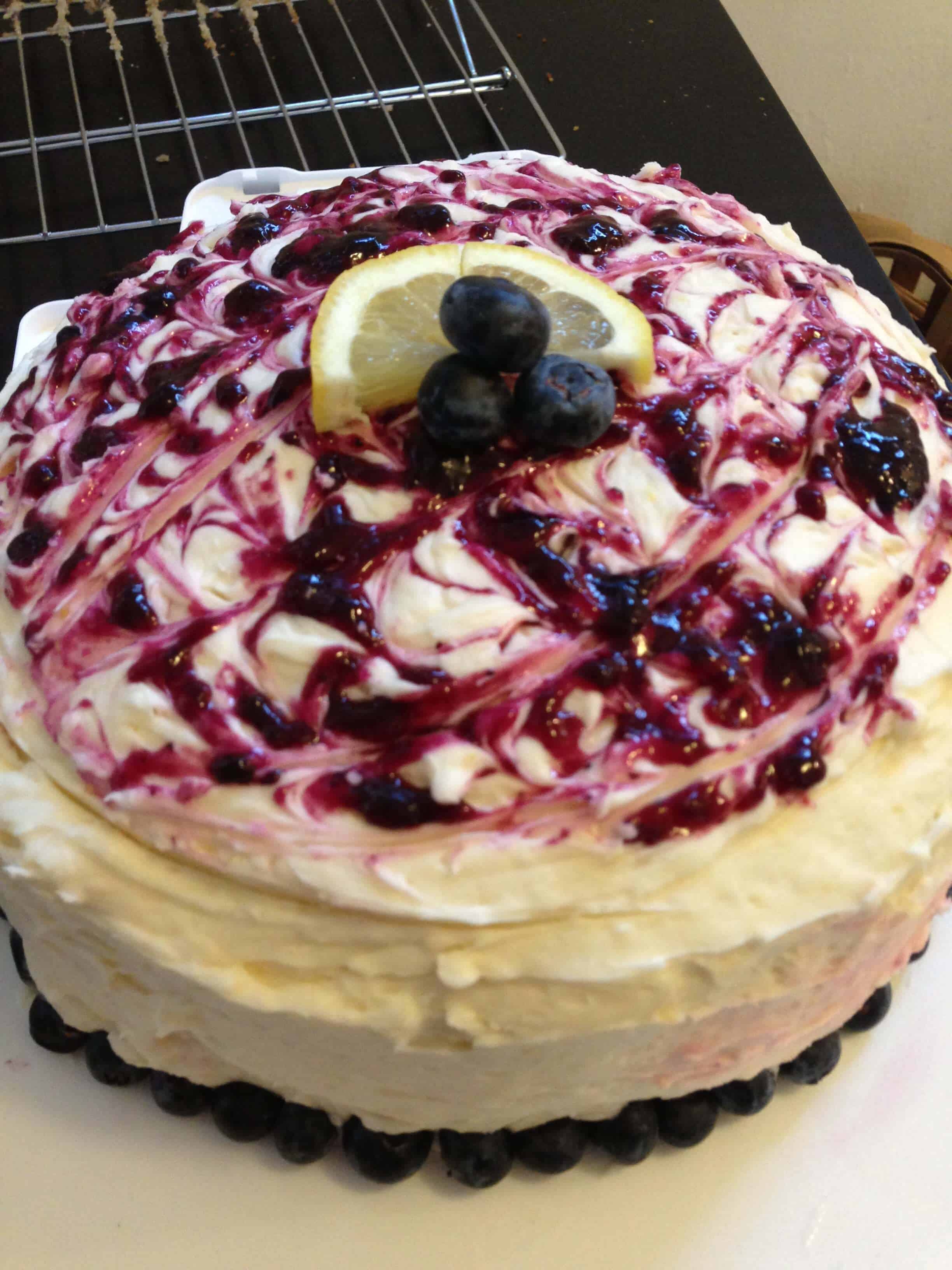 I was REALLY pleased with the end product; the cake had a very light texture, and the lemon gave the cake such a bright taste. My coworkers agreed, and not a single slice was left. This is one of the best tasting cakes I’ve made 😀